WHAT IS PALAKKAD CUISINE?

Palakkad - earlier known as Palghat – is a small town in South India – in Kerala state – more specifically on the Kerala-Tamil Nadu border. But it has an identity of its own! It is (was?) mostly inhabited by ‘Tam-Brahms’ – more specifically Iyer Brahmins from Tamil Nadu. But as the town has been in Kerala, these Iyers mingled with the Malayalam-speaking people of Kerala and eventually evolved a separate dialect. This dialect is similar to Tamil, with a splatter of Malayalam words in it yet different from both (could I call it Malamil?). And it is specific to Palakkad Iyers!

I belong to the clan.India is a land of many states, many languages and an amazing variety of cuisines. You can mostly make out the state that a person hails from on listening to his speech. On occasions when you cannot – for whatever reasons, you just have to ask him and he would say – ‘Maharashtra’ or ‘West Bengal’ or whatever. But when we are posed with this question, my husband replies ‘Kerala’ and I blurt out ‘Tamil Nadu’ – and we have had several unresolved debates on this issue. What is politically correct is that we are Tamilians settled in Kerala. My husband was born and brought up in Kerala and hence his affinity for Malayalam. I was born in Kerala but brought up all over India. And I considered that ‘Malamil’ is closer to Tamil than Malayalam. Still it is a confusing notion – you see, our forefathers have used Malayalam script to convey Tamil sentences in their letters and we have never for a moment considered it unnatural. Anyway, ours is a beautiful and enviable blend of both cultures. Now I have learned to tell acquaintances, “You know, we are Palakkad Iyers” and sure enough they understand – especially if they are South Indians. It’s so simple because ‘Palakkad Iyers’ have an unmistakable identity.

My parents were blue-blooded Palakkad Iyers and we kids spoke the dialect and were brought up almost entirely on Palakkad cuisine - which is purely vegetarian. Wait - I think I have forgotten to tell you something very important. This cuisine does not have any trace of onion and garlic! The only exceptions are the‘onion sambar’ and 'puri masala' which have snoozed their way into the Palghat Iyer household of my generation as occasional delicacies.

But after my marriage I settled down in Pune – in a cosmopolitan campus. Naturally my boys preferred North Indian food. When my conservative in-laws moved in with us, I had to maintain a balance and satisfy both the generations – a Herculean task. My husband and I would eat whatever was convenient. My sons came to terms with some of the ‘koottaans’ (gravy curries) – so they would be included in the menu at periodic intervals. Soon I had almost forgotten the rest of the ‘koottaans’ prepared by my mother. Whenever I visited her she would specially prepare them for me and I would slurp it all with relish.

When I visit my children in the US, I still make North Indian stuff mostly. Back home it is still a North-South mix. But recently all those abandoned Palakkad recipes have been revived – the spicy North Indian food has started getting a bit harsh on our aging digestive system. And what a revelation! There are so many of them resurfacing! The menu is easy on the stomach, it is not spicy, it is good wholesome diet. Also by choosing the right menu on the various days of the week, we can eat right and eat healthy. I suddenly realized the danger of those recipes becoming history. I’m sure there will be many who have relished them in their childhood and would love to revive their taste for them. This collection of Indian vegetarian recipes for authentic Palakkad meals is for all those and for genuine foodies!

Rice is the staple food of South Indians. My parents’ generation would have a three-course meal – now one-course has been slashed – what with our fascination to eat less to maintain our figure and health! The first course is rice mixed with ‘koottaan’ (‘kozhambu’ in Tamil) with a ‘thoran’ / 'poduthuval' / ‘mezhukkuvaratti’ (‘poriyal’ in Tamil) / 'koottu' / 'thogial' as side dish. The second course is rice with ‘rasam’ (sort of sour lentil soup) along with the same ‘thoran’ and ‘pappadam’ or ‘karuvadam’ (fryums). The final course is rice with curd/buttermilk with a pickle. A good combo of lentils, vegetables, coconut, curd…. supplying a variety of nutrients. And very little spice and oil. Some ‘koottaan’ will have a good amount of coconut but no lentils, some a good ratio of lentils and negligible coconut and yet others with neither of them. Most of the ‘thoran’ and ‘koottu’ have coconut but the ‘mezhukkuvaratti’ has zero coconut but then oil content is more. The ‘cholesterol-conscious’ ones and the ‘weight-watchers’ are bidding goodbye to coconut even in the ‘thoran’ but foodies like me definitely miss the taste!

One more thing - for a meal either the ‘koottaan’ or side dish will be sour. You have standard combos which are unbeatable! I guess a lot of science has gone into these recipe-combinations. 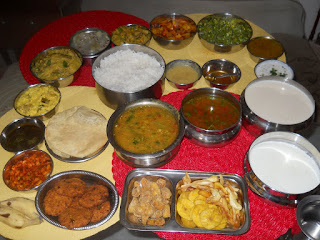 For any religious function, there is an elaborate feast – but of course! The menu compulsorily comprises – kichadi, pachadi, thoran, mezhukkuvaraty, koottu, kaalan, olan, avial, pappadam, injikkari / pickle, vadai, payasam, rice, paruppu, sambar, rasam, buttermilk…… plus some more if they wish! 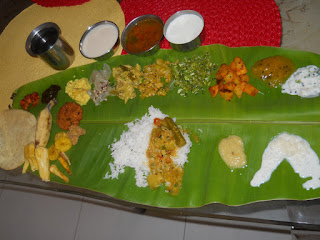 And everything is served on a banana leaf,  not a plate - that too in a specific order. And eaten with the right hand - not with a spoon. Now how do we manage to eat the course of rasam rice with our hand - don't ask! Just try it out!! Nowadays 'payasam' is served in a small bowl but old-timers still enjoy it by pouring it on to the banana leaf and let it mix with the remnants of rasam and curries on the leaf!