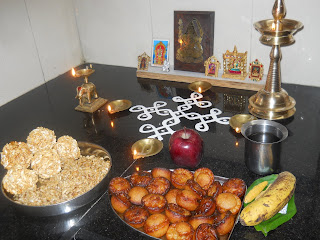 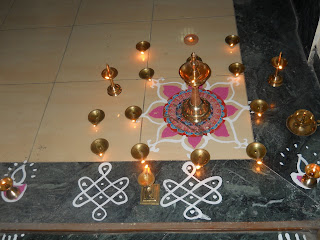 ‘Kaarthigai’ is the festival celebrated in South India on the full moon day (Poornima) falling in the month of Vrishchigam (between 15 Nov & 15 Dec). This festival celebrates the brother-sister relationship – ladies light lamps in front of the house and in their yard / balcony and pray for the welfare of their brothers and offer Neyyappam, pori and adai as ‘neivedhyam’. 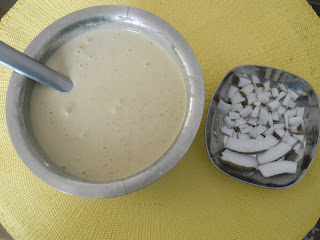 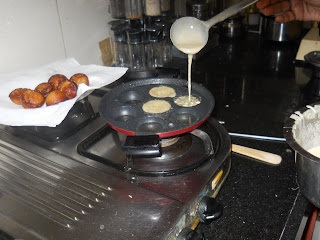 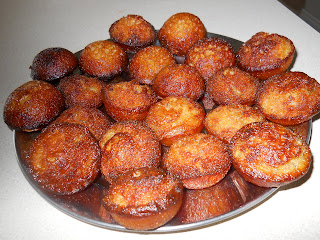 Neyyappam / Appam is prepared on most functions and pujas and festivals like on Kaarthigai and Janmashtami. It used to be fried in ghee as the name suggests but calorie-conscious ladies these days fry it in oil.
Makes around 30 appams


Method –
Soak rice in water for 2 hours.
Dissolve jaggery pieces in minimum quantity of hot water and set aside.
Wash the rice and drain off the water.
Grind the rice in a mixer, adding the jaggery water instead of water and grind well. Add the wheat flour and mashed banana and blend well.
Add coconut pieces/ grated coconut and cardamom powder and melted gee and mix well.
Set aside for at least 4-5 hours.
The batter should have a pouring consistency – almost that of besan batter for bhajji.
Heat oil in an appam mould (paniyaram mould) and pour one tbsp of batter into each semicircle.
Start turning them one by one - after a minute.
Allow to brown on medium heat. Turn them over once again so that the other half also browns.
Poke them with a knitting needle / pointed knife – if the batter doesn’t stick to it, you can remove them one by one and spread on a tissue paper to soak the oil.

Tips –
If you turn the appams soon you will get the appams in the shape of spheres. If you are not able to as it sticks to the mould, rest satisfied with hemispheres!
Also see that you fill each hole of the mould with the batter to get spherical ones.
Invest in a non stick appam mould – it is worth it.
If the jaggery is in excess, appams will stick to the mould.
If the appams turn out hard, add a piece of mashed banana and mix well.
The appams will turn out better if the batter is kept in the fridge overnight and taken out and left for a couple of hours to attain room temperature.
Add a tsp of urad dal to the rice while soaking it for softer appams. Alternately grind for appam in same the grinder / mixer soon after grinding for dosa/idli.
Don’t be overwhelmed by these tips – your appams will turn out good in all probability.

Method
Take 3 tbsp of water in a big kadhai.
Add the jaggery and heat till it dissolves. 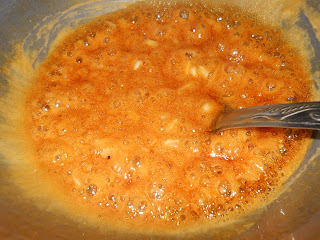 Add the coconut pieces and continue to heat till the syrup becomes really thick.


Lower the flame and add the nel pori and


stir well.
Turn off the heat.
Cool for 10 minutes.
Wet your palm and make balls with the still hot pori.
When cool, store in an airtight container. 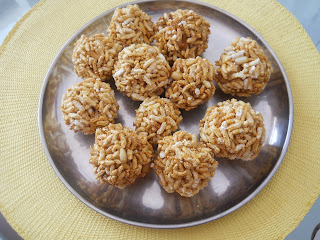 Tips –
Cleaning the 'nel pori' is time-consuming - so buy it and clean it in advance. In North India it is available only during Diwali - so buy it then itself.
To test the syrup, add a spoon of the thickened syrup to half a cup of water - you should be able to roll it up as a marble.
If you are unable to make laddoos with the pori, store in container just like that – it will be equally tasty! 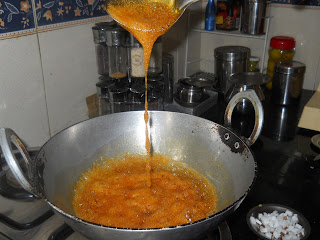 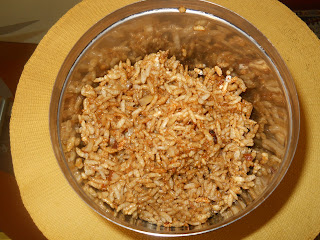 The same ingredients (except the pori variety) and same procedure as for nel pori is to be followed for ‘aval pori’ too. 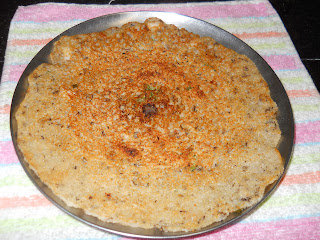 Method
Soak the rice and dals together for 2 hours.
Grind the mixture coarsely in a mixer along with red chilli, green chilli, and pepper corns.
Sprinkle asafetida.
Add salt and chopped curry leaves and mix well.
Set aside for 6-7 hours.
To make adais, heat tava and grease it with oil.
Make a thick adai (as thick as uthappa) and add oil all around it.
Allow it to cook on medium flame.
When it is ready, flip it and add anothe spoon of oil all around it.
Cook the second side too.
Remove when done.

Tips
The adai should be cooked well - don't be in a hurry.
It will taste great with more oil - but you know where to draw the line, don't you?

Posted by brinda.balasubramonian-brins.blogspot.com at 3:08 AM